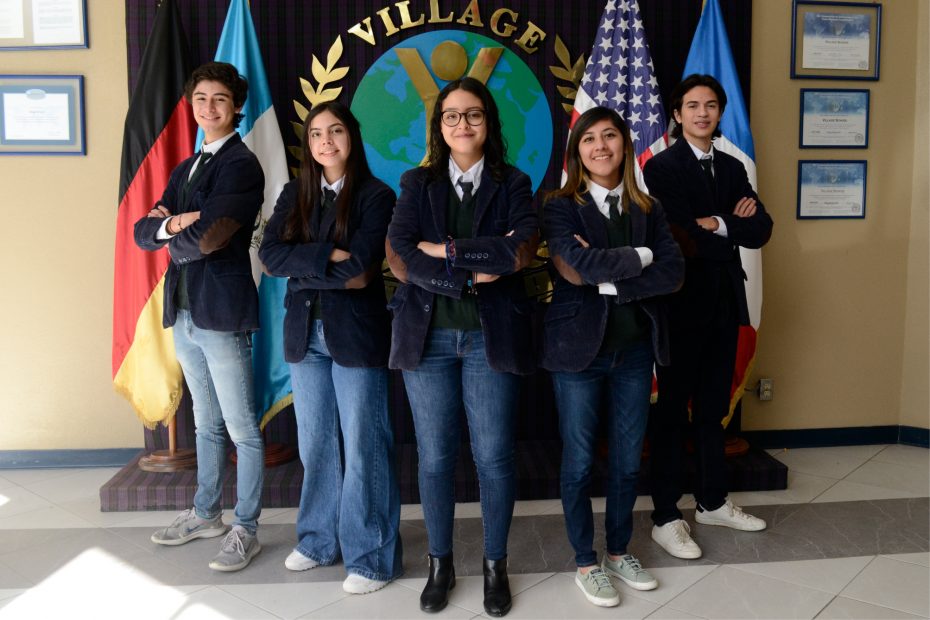 “We fight for a free world, we fight for a fair world” Those were the words spoken by the Village School debate team last December when they were proclaimed the winners of the 1st edition of  the Pan-American Debate League, organized by the Uneatlántico University in Spain  This final encounter was the culmination of a long journey, a journey to represent their school, and then their country, a journey that started months earlier, when the tryouts were held to complete the team.  The students who proved to have the best speech, research, and persuasion skills, earning their places on the team were Maria Jose Barrientos, Valeria Escobar, and Ximena Cabrera from twelfth grade, as well as Gabriel Aguilar and Luis Pablo Morales from tenth.  They knew that it would be a challenge, not only because of the academic responsibilities they already had outside of the competition, not just because of what the championship meant for them and the school, but also because this new format of online debating required a new set of skills they needed to acquire, develop, and practice.

These students first had the opportunity to take a course offered by the university with experts in different fields such as communication, public speaking, and debating.  Then, for the debate in the National League, they had to prepare the motion “THBT the development of cities is compatible with the environment,” for which they did countless hours of research, speech writing, and practicing.  After a random selection done by the university, the Village School team was informed they would be debating against the Interamericano School team; the team that got the highest score in that debate would be representing Guatemala.  The hours of work put into preparing for this debate paid off – the Village School team was awarded first place and would represent their country and school in the Panamerican League!

Once more, the team had to prepare to debate, only this time they knew the challenge was even greater, as they had to be ready to debate against teams from El Salvador, Panama, Ecuador, the Dominican Republic, and Mexico. The motion they had to prepare for this round was “THBT the immigrants from countries in armed conflict deserve automatic asylum”. The team did the research, prepared speeches, and sharpened debate skills to achieve the goal – another victory.

The day of the final round of debates finally arrived and the team was ready – they won the semifinal! It was time for them to prepare for the final round, in which they were going to be debating against the team from Panama.  After about 50 minutes of intense debate, feedback from the judges, and waiting for about 15 minutes, the announcement was made: the debate team from Village School, representing Guatemala, were the winners of the Panamerican League.  For years Village School has competed and won in National Tournaments, but with this championship, the team confirmed that Panther excellence in debate is not just recognized nationally, but at a Panamerican level as well. We are proud of and celebrate our students and look forward to this being only the beginning!

Another tournament in which our Debate Team participated during this school year was the “Torneo Interescolar de Debates” organized by Francisco Marroquín University.  Village School has been participating in this tournament since 2013, always being able to bring a trophee home. Of course, this was not going to be the year in which we were going to stop, not even the situation or the new online format was going to stop the Debate Panthers.  The tryouts were made, and two teams were formed, one by María José Barrientos, Daniela Mendoza and Valeria Escobar and the other one by Ximena Cabrera, Gabriel Aguilar and Luis Pablo Morales.  The process began, students started researching, building cases, and developing their arguments for all the motions that were given by the organizers at the UFM.  On the day of the tournament, both teams went debate after debate showing what the Village Panthers Debate Teams are made of.  The teams were successful in proving their points and standing strong when defending their positions.  At the end of the tournament, Village School was able to take the 2nd place in the Spanish category, demonstrating, once again, that Village School will always have a spot on the podium of this tournament.

During this school year, Village School participated in several online Model United Nations (MUN) Conferences. MUN is an academic experience in which students get the opportunity to discuss current global issues through research, writing, and debating in order to find possible solutions.  Our students, divided in two different groups, were able to successfully attend two MUN conferences.

One team of five students from eleventh grade, attended the MUN Conference organized by the International School of Querétaro. During the conference, Ana Paiz and Ximena Martínez worked as delegates of Kenya and India in the UN Women committee. Santiago Del Cid was assigned to work as a delegate from Argentina and he chose to be part of the Organización de Estados Americanos (OEA) committee. Pablo Gálvez was a delegate representing Spain within the Economic and Social Council committee.  Melvin Somarriba worked in a futuristic committee, TMA, representing a Small Magellanic Cloud and José De León decided to work on the Human Rights committee as a delegate from Japan.

It is important to note that although all of our students had an excellent participation in the conferences, there were some students who got special recognition. This was the case of Yehosua Hércules with a Verbal Mention as well as Andrea Naranjo, Ricardo Palma, and Martín Cordero who received an Honorable Mention.

This activity works under real United Nations procedures and allows students to use political and diplomatic guidelines.  It also helps them develop critical thinking, negotiation, confidence, speaking, and leadership, amongst other skills. Reasons why at Village School we are proud to have such a motivated group of students participating in these conferences.